Be aroused by the flare of flamenco dancing in the Sacromonte Caves of Spain, and cool off in the magnificent Mediterranean Sea.

On this adventure, you’ll be aroused by the flare and fire of flamenco dancing in the Sacromonte Caves of Spain. You’ll rock the party in the trendiest bars of Lagos, Portugal. And you’ll be mesmerised by the pristine white fortress of Alhambra. But don’t worry, if it’s all a little too hot to handle, you can always cool off in the magnificent Mediterranean Sea.


Required fields are marked with an asterisk (*). 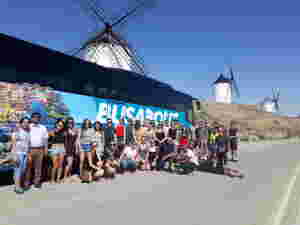 Save if you buy two or more qualifying trips together.

Your adventure begins as we depart the Spanish capital of Madrid at 7:30am on your relaxing journey to Seville safe in the hands of your fabulous Busabout crew. We have a stop in Cordoba to grab some lunch and see the Mezquita, an ancient cathedral/mosque. This evening we arrive in the picturesque metropolis of Seville and are introduced to the city with an intimate walking tour with a local guide. Enjoy a tapas dinner or some sundowners at the hostel rooftop bar this evening as the sun sets over the city. Then feel free to relax or explore the city’s eclectic nightlife options.

We make our way towards Portugal at midday once you have had your breakfast. Enjoy the beautiful scenery as the coach carries you across the Portuguese border and along the Atlantic coast before our afternoon arrival in the city of Lagos. Check into your new digs and relax or stretch your legs and get a feel for your new surroundings. This evening we have an optional delicious, traditional dinner. Tonight, in a city renowned for its vast variety of watering holes, follow your guide as they lead you to all the best bars for an epic Busabout pub crawl!

Sleep in late if you’re feeling particularly tender, as today is full of free time so you can set the pace. We offer an optional kayaking outing departing early in the morning, so dust off the oars and get set to explore the stunning sea grottos of the Algarve. Spend your time soaking up the sun or having a swim at one of the many gorgeous beaches in Lagos or delve the depths of history as you explore the old town. Tonight, prepare for round 2, as you head out for another night on the town to revisit your favourite establishments from last night, if you can still find them!

Today you have the option of enjoying each meal of the day in a different country! We kick off with a scrumptious breakfast in Portugal before making our way southeast along the coast on towards our lunchtime destination of Tarifa, Spain. Enjoy a delicious traditional meal for lunch and check out the local sights including Guzman castle, and an assortment of great beaches along the Straits of Gibraltar. Tonight you have the option of taking a ferry into Morocco for a guided tour of the city and its markets. Join us for a delicious, traditional dinner and a night in the beautiful Moroccan gem of Tangiers.

Tarifa to Ronda to Granada

Today enjoy your breakfast and your final few hours in Tarifa, so see those last minute sights and get your souvenir shopping done, as at lunch time we board our coach and begin the next leg of our journey onwards to Granada via Ronda. Take some time to explore Ronda and its magnificent bridges. We then make our way to the provincial capital of Granada. Join your guide this evening for a delicious traditional tapas dinner. Tonight you have the opportunity to join us for an optional excursion to watch an incredible flamenco show deep within the Sacromonte caves.

Today we get right into the action after breakfast. Join us for an included tour of the glorious palace compound of Alhambra. Described by the Moors as “a pearl set in emeralds” the pristine white fortress stands a stony monolith amongst the surrounding trees. Afterwards we offer a relaxing excursion to soak off your stresses in a Moorish Haaman. This evening join your fabulous Busabout guide for a night on the town. Since it’s the last night let’s send it off with a bang and enjoy a few drinks with your fellow passengers and make some memories as you dance the night away awash in the vibrant nightlife of Granada.

Granada to Consuegra to Toledo to Madrid

Enjoy another great breakfast as we depart Granada for our final destination, the Spanish capital of Madrid. We have two stops en route with our first being at the world famous windmills of Consuegra, which became popular in the 16th century upon the publication of Don Quixote. Our second stop sees us arrive in the religious mixing pot of Toledo, renowned for its coexistence of Christian, Muslim, and Jewish cultures. Tonight we arrive in Madrid and share a final dinner before saying our goodbyes. We hope to see you again, and if you’re continuing your journey on our Hop-on Hop-off network, the next stop is Lisbon!

Living Mad Hostel, Madrid at 7:30am

Accommodation is included for this trip. You will stay in Multi-share Hostels and Hotels.

You can upgrade to a twin private (minimum 2 persons) from MyTrip once you have made a booking.

* All upgrades are subject to availability.

If you're flying, try Skyscanner flight search below. All our Adventures are perfectly designed to link up for those wanting to see a bit more!

Here is the list of available optional activities, excursions and freetime avaiable on this trip:

All optional extras and excursions will be available to book through your Busabout Guide on the trip.

We sell travel insurance from WorldNomads.com. It is available to people from 140 countries. It’s designed for adventurous travellers with cover for overseas medical, evacuation, baggage and a range of adventure sports and activities. Get a free quote in less then a minute.

Yes, depending on availability there is no problem to change dates (a small fee applies). If the new date is more expensive the difference will also need to be paid. You can also transfer the funds you’ve already paid over to another trip of the same or higher value if you change your mind, as long as it’s outside of the notification period.

What happens if I cancel?

A cancellation fee applies based on the length of the trip and how soon the departure date is. Please visit our terms and conditions page for more information.

Contact us if you want to learn more about this trip or about our services.

If you have any more questions please visit our customer help center for more information about the trip and policies.

Ask a Question about this trip