Bruges (pronounced br-oo-j) is often overlooked in lieu of its more renowned network neighbours: Paris and Amsterdam. While most passengers have probably never heard of this smaller Belgian city before, it is sure to surprise and impress the lucky travellers that hop-off here. You’ll be instantly struck by how much there is to experience and enjoy in this cute city: from its waffles, chocolate and frites to its white swans, intricate handmade lace and stunning architecture. 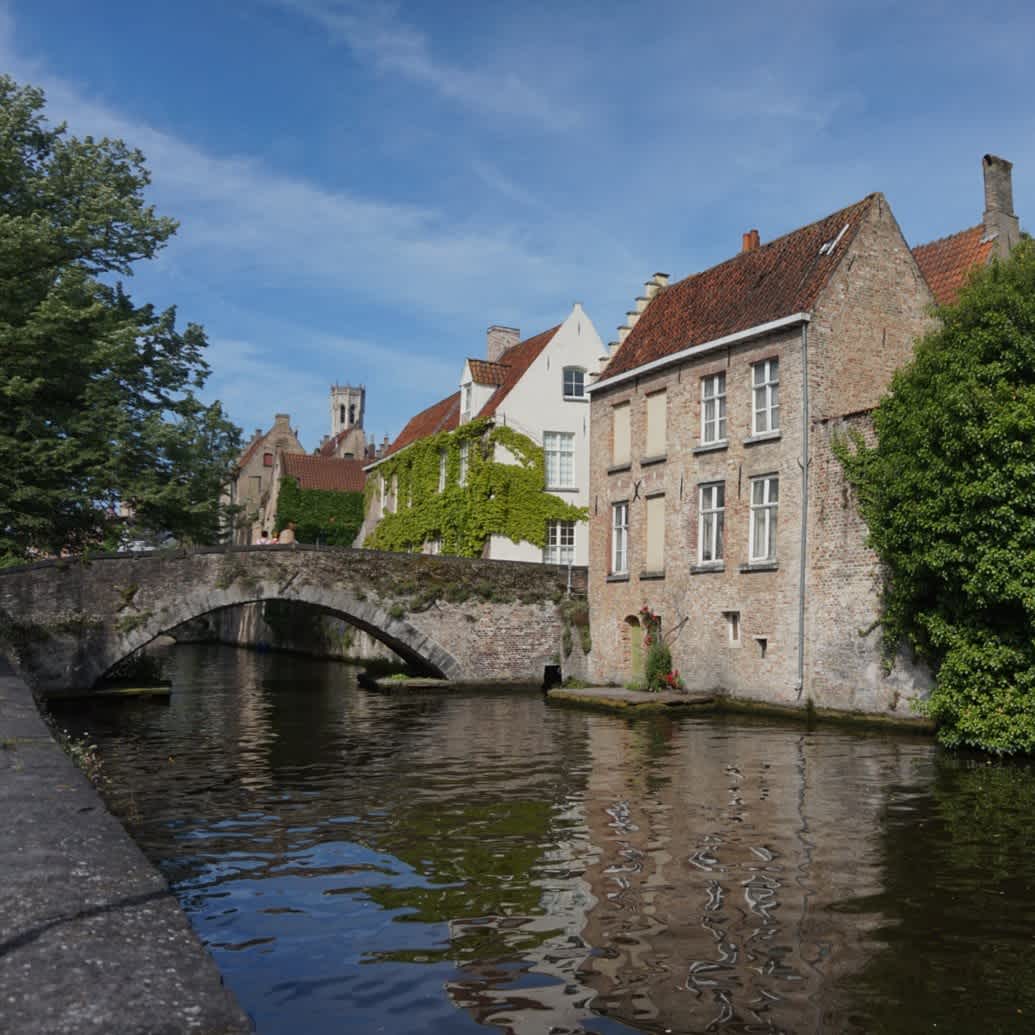 We arrived in the afternoon, checked in to The Bauhaus, then beelined straight for the ‘best waffles in town’ – according to all the locals I’d spoken to. Surprisingly, they’re from a small white van that can be found on the Burg Square near the Basilica of the Holy Blood (free entry). This medieval city is a UNESCO World Heritage Site brimming with history. For the best view of the city, you can work off your waffles by climbing the 367 steps to the top of the iconic bell tower!

The Bike Tour, A Highlight

One of the best things we did during our stay was the Quasimundo City Bike Tour. The owner, Jos, is widely travelled and has grown Quasimundo into a community of local guides whose tours feel like a friend telling you about the beautiful place they call home. We had blue skies and sunshine for our relaxed bike tour along the canals, over cobblestone streets, across stone bridges and on to all of the city highlights. 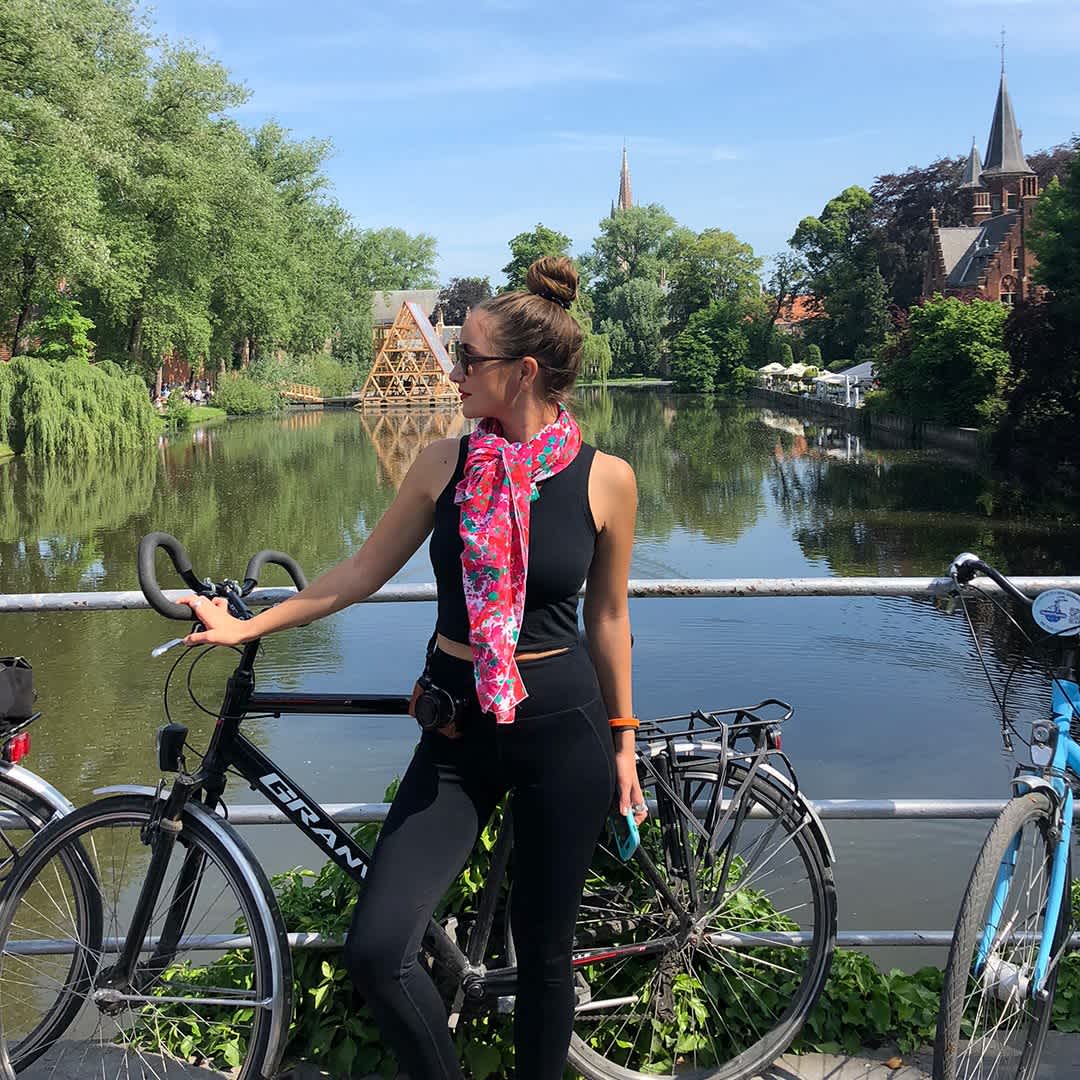 We rode past the famous Love Lake (Minnewaterpark) named after Bruge’s ‘Romeo and Juliet’ equivalent; the Begijnhof, a pretty square of white buildings that used to house a community of poor widowed or single women in the 14th century; and an area filled with dozens of stunning white swans, which are a curse according to old folklore.

The story goes that the hated Austrian emperor Maximilian was captured by the oppressed people of Bruges and forced to watch the execution of his advisor Pieter Lanckhals (which sounds like the Dutch “lange hals”, meaning “long neck”). When Maximilian escaped, he cursed the city with swans as a constant reminder. Between our biking, we cooled off at Vlissinghe, a 503-year-old pub with an adorable outdoor terrace; before gorging ourselves on huge portions of traditional food at Lion Belge afterwards. 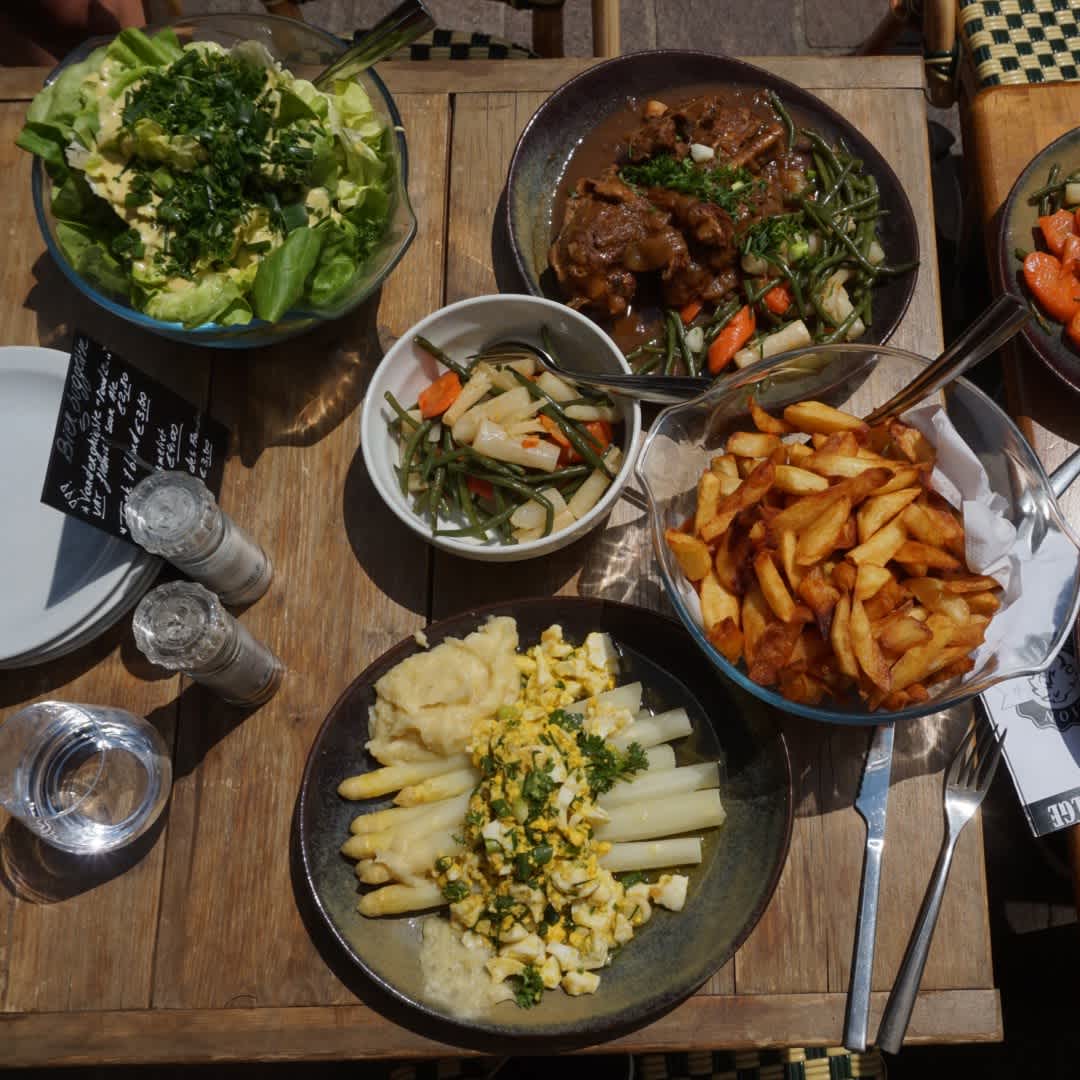 A Little Bit Of History…

Despite being small in size, Belgium has been an economical and industrial hub throughout history, as it was conveniently located between many countries and on the Mediterranean Sea. In fact, when you’re in Bruges, you can still visit the main market square where the merchants would sell their bounty, and see the houses and streets that were inhabited by the different European nationalities that traded there.

Belgium is renowned for its wealth, though its location has also made it the battleground between many European powers throughout history. One of the most famous memorial sites is Flanders Fields, which experienced a lot of bloodshed during World War I. If you’re like me and interested in history, I would highly recommend booking the Flanders Field tour, as it will provide transportation (it’s a bit out of town), an engaging tour of the fields and all of the history from a guide.

Beer Tasting At The Bauhaus!

If you’re after a local experience, you don’t have to leave the comfort of The Bauhaus. Despite the fact that I don’t drink, the Squad and I did the beer tasting at the hostel and I learnt so much. Belgian beer is renowned for being some of the best in the world and we got to try six different types, ranging from a fruity wheat beer to a Trappist beer, meaning that it was brewed by monks in a monastery.

We spent our last night sitting on the hill at the base of a windmill, enjoying a Belgian beer and chocolate picnic and watching the orange sunset over the city. I know the rest of the Squad were blown away by Bruges after not knowing much about it from the outset. As for me, this visit far surpassed my last, and cemented my love for this hidden gem!