Amsterdam – the city of canals, cyclists, clogs and ‘coffee shops’ that sell something else starting with a ‘C’. I remember being really excited to visit Amsterdam for the first time last year, then just before I arrived, I questioned my decision, as I’m certainly not into the sex, drugs and rock and roll that seems to be its calling card for many other tourists. However, once I arrived, I realised how wrong I’d been about this amazing city full of history, art and culture, and how much there is to do for all types of travellers.

We had the most glorious summer weather on our first day, so we caught the free ferry to NDSM, a former shipping yard that is now a hipster’s paradise – think beautiful street art, studio spaces made from shipping containers, restaurants in old greenhouses, and accommodation built into cranes, trains, buses and boats.

We were led to a small shipping container covered in stickers, and peeled back dark curtains to reveal Plleck, one of NDSM’s most popular watering holes, with its modern indoor dining space and big outdoor area by the water. After refuelling, we visited the iconic mural of Anne Frank by street art legend Eduardo Kobra, with the title, “Let me be myself”, which nicely sums up this unique and quirky suburb of Amsterdam. 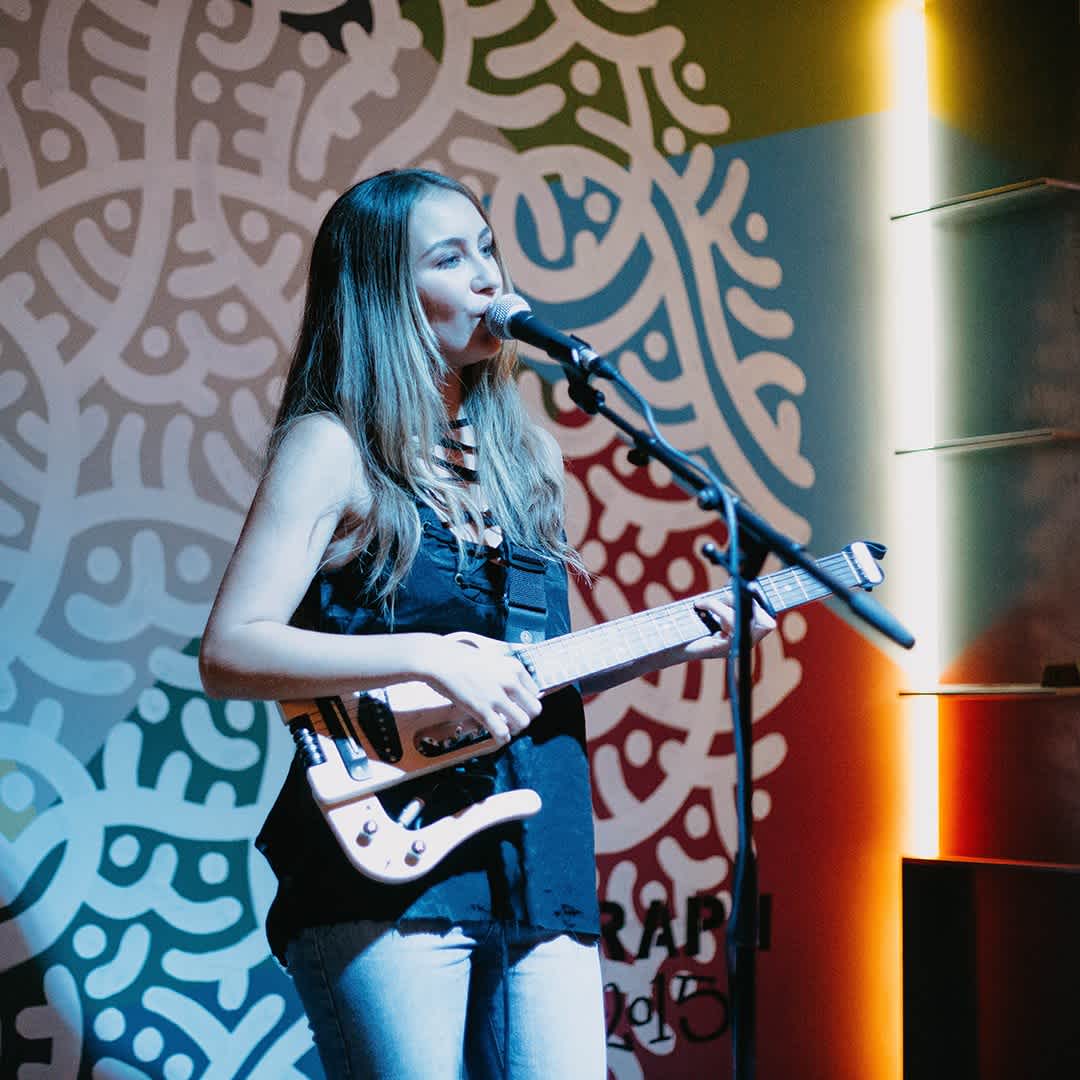 After that, we caught the ferry back to Clink Noord Hostel, as I was playing a gig there later that night as part of their ‘Play and Stay’ initiative for touring musicians. Once I’d played my show, we went to the far less crowded ‘IAMSTERDAM’ sign just outside the hostel, to take pictures and watch the orange sunset over the water. We then went to the top of the A’dam Lookout, though unfortunately we didn’t get to fly on the famous ‘This Is Holland’ swing – next time!

A Day In The Heart Of The City…

The next day we headed into the heart of The Dam to see some of the touristic highlights. Amsterdam is quite simple to navigate, as it’s a pretty straight walk from Centraal Station to anywhere in the city. If you’re game, you could always do as the locals do and rent a bike. Whether you’re a pedestrian or a cyclist though, please be aware – it can be a mine field of bikes, trams and cars, so don’t wander into bike lanes or tram tracks (or expect to hear some angry bike bells).

Walking straight from the station, we passed some iconic crooked terrace houses, that developed their lean due to being built on a base of 11-metre wooden poles stuck into the ground. Amazingly, even modern houses are built this way, as all of Amsterdam is built on swamp land below sea level (except now they’re on reinforced cement poles, so hopefully they’ll stay straight!). If you want to try some traditional food, you’ll also pass by the ‘best frites in Holland’ at Manneken Pis – look for the long line! 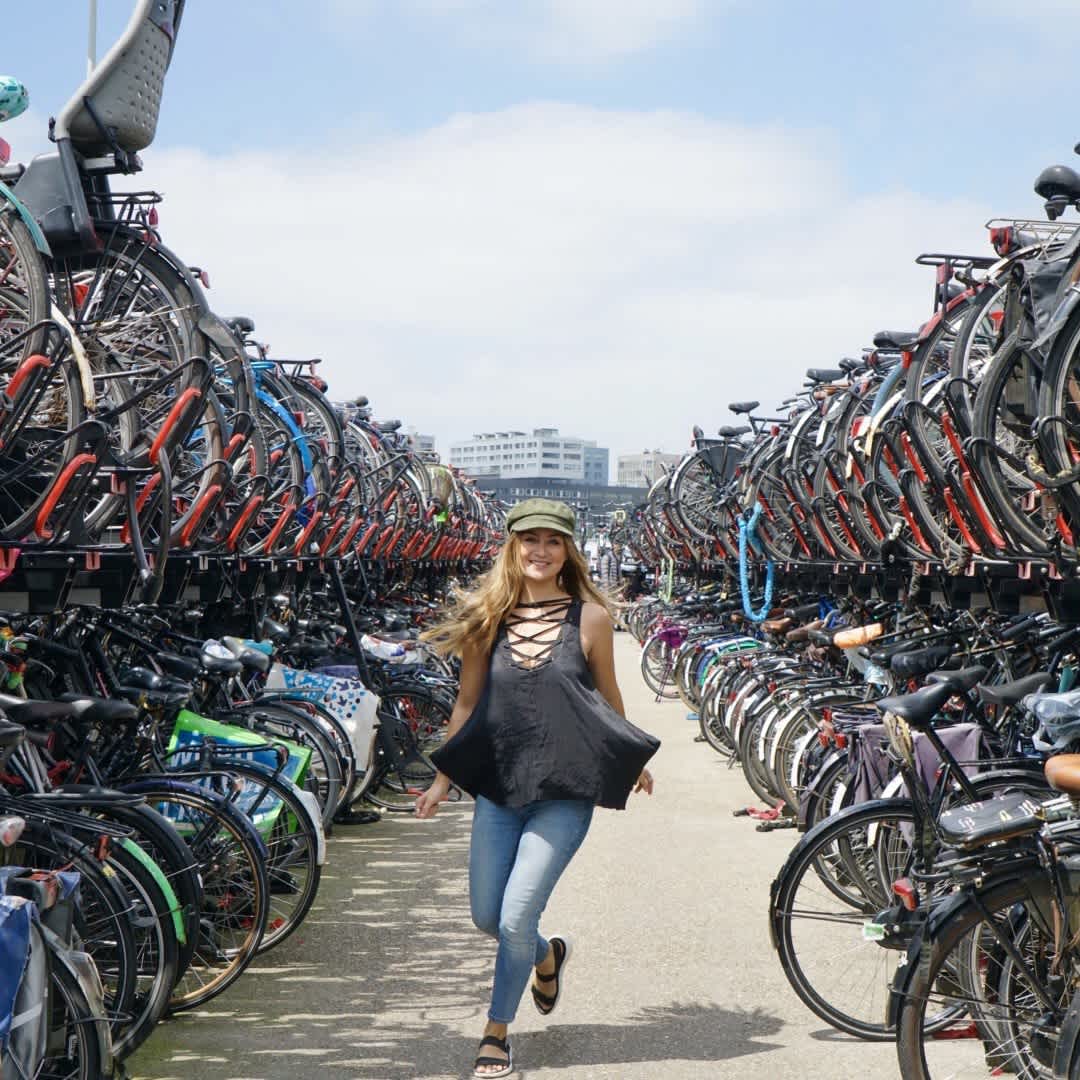 We kept walking and passed the floating flower markets, with their vibrant tulips (one of Holland’s biggest exports); the former Royal Palace and Dam Square (which was built on a dam on the Amstel River, hence the city’s name); stunning canals (built to channel all of that water, with the help of windmills), and eventually we reached beautiful Vondel Park and the impressive museum quarter. If you’re an art and history lover make sure you visit the Rijksmuseum, which has everything from Dutch classical artworks to Asian historical artefacts. For arguably the most famous Dutch artist’s original works, you can visit the Van Gogh Museum; or for more modern and contemporary art, the Stedelijk is located there too.

If you veer a little off the beaten track to the Red Light District, you’ll find a totally different side of Amsterdam, with overt examples of the usually taboo and illegal drug and prostitution trades. The Dutch lawmakers have a unique way of looking at things: if it’s good for the economy, and it’s not bothering anyone, then it’s generally accepted. Admittedly, it can be confronting seeing advertisements for live sex shows (Casa Rosso being the most famous, if you want to check it out) and girls in glowing red windows. However, their approach has improved the prostitution industry making it a lot safer for the women, with mandatory health checks, passport checks (to avoid trafficking) and access to security if anything goes wrong.

The ‘coffee shop’ scene is also interesting, allowing the sale and consumption of cannabis on the shop premises. Naturally, both are taxed to benefit the economy. If you want a better understanding, I’d highly recommend the Sandeman’s Alternative Amsterdam Walking Tour. I learnt a lot about the modern history of the city (think squatters and house boats post WWII), as well as tips on how to enjoy the ‘local delicacies’ safely if you choose to do so. 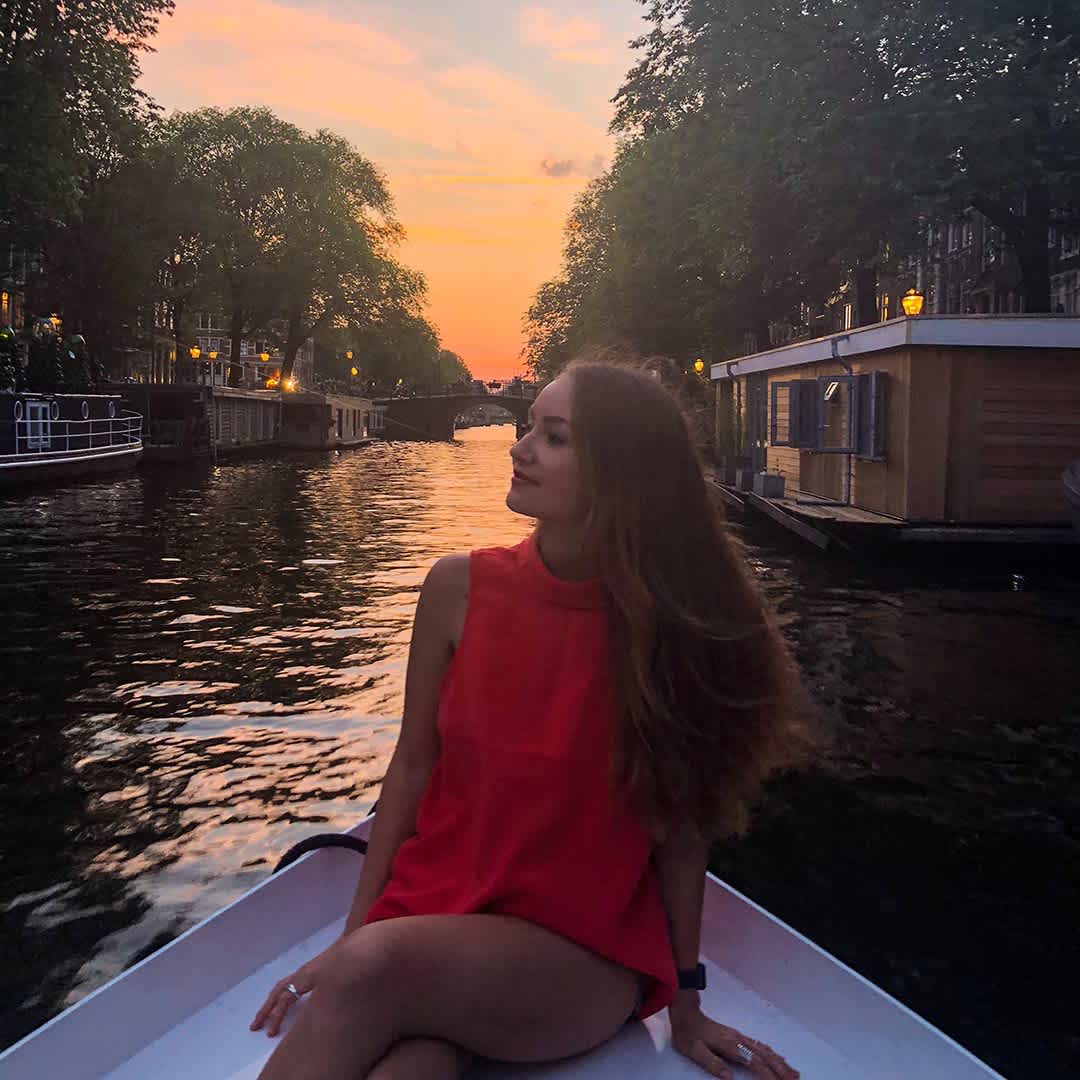 After the walking tour on our final night, the squad and some friends rented a boat and cruised through the canals for two hours. This may not be the most budget-friendly activity, but it was the highlight of my three visits (second is the Country Bike Tour I did last year). The views of the houseboats, houses, bridges, bars and relaxed people shone under the setting sun, and it was a special time to relax and reflect on our short but superb time in Amsterdam. Afterwards, we checked out some local bars and enjoyed the nightlife. The next day we hopped on the coach bound for Berlin, welcoming the comfortable Busabout ride to sleep off the Amsterdamage of our late night.

Clink Noord is an amazing hostel in terms of its facilities, activities and location. What I particularly loved was its focus on ‘Creative Hosteling’, which means you’ll find live musicians, funky wall art, free exhibitions and a really fun vibe in their common areas and Zinc Bar. I played my original music there on a Friday night and it was so nice to see that some of the friends we’d made on our Busabout coach came to watch. 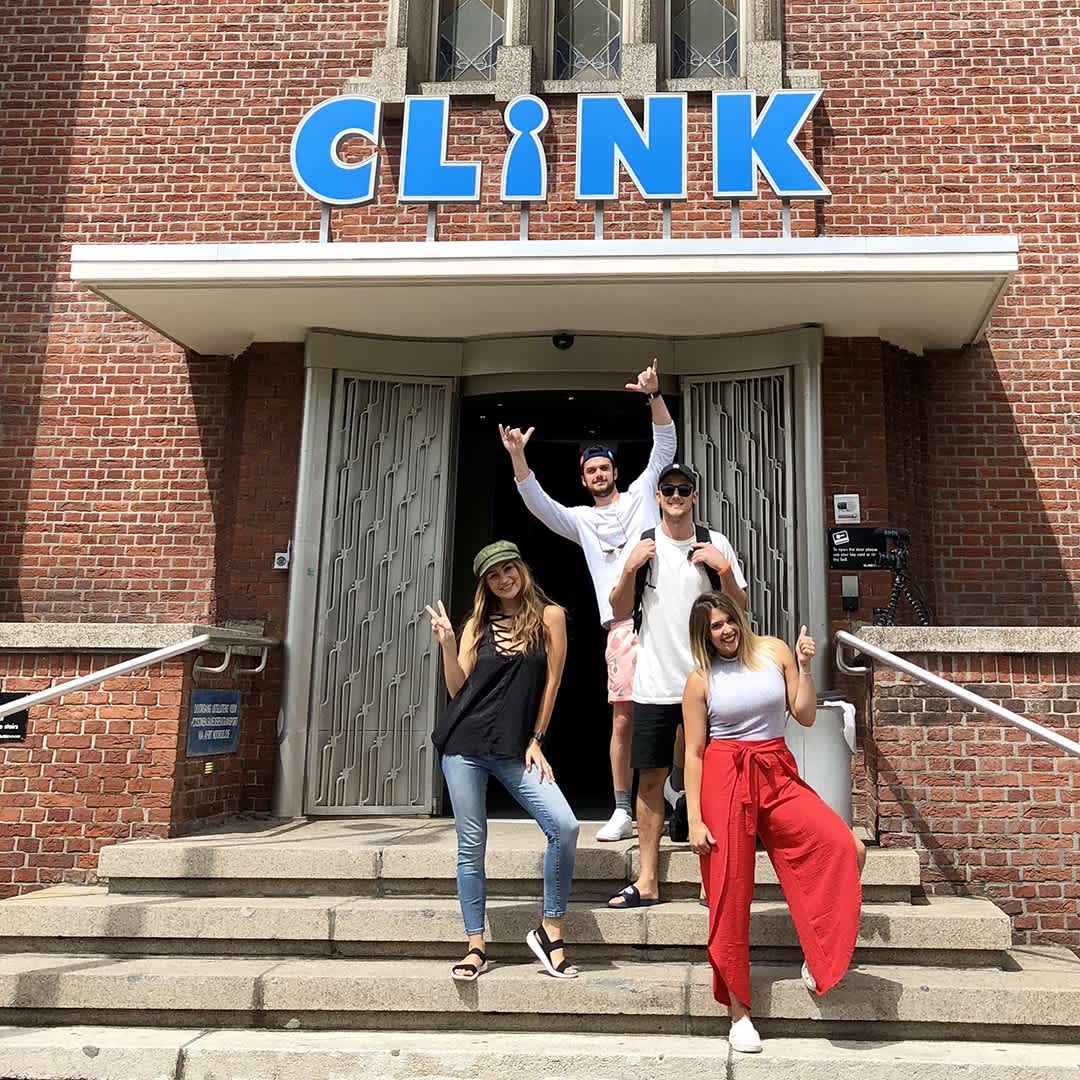 As the building used to be Shell Petroleum’s offices and labs, there is a distinct scientific theme to the huge open-plan common areas, with the scientific table of elements sprawled out over lockers in the reception area, and the test-tube and alcohol adorned Zinc Bar delivering the fun at night. The hostel itself is conveniently located directly across from Amsterdam Centraal station, linked by a quick free ferry that runs all day and night. It’s also right around the corner from the second ‘IAMSTERDAM’ sign, which is far less crowded; cute bars and restaurants; the A’dam Lookout point; and the This Is Holland rooftop swing.

If you want to stay in, there is plenty going on at the hostel from morning to night. The rooms are tight, but downstairs there are yoga classes, solo traveler meet-ups, live music, art exhibitions, ping pong and a delicious new menu of cooked food. It also has one of the best breakfasts I’ve had in a hostel, with plenty of food and drinks in their buffet platters for all dietary requirements. We loved our stay in this pretty, colourful hostel and would highly recommend it for anyone traveling to Amsterdam.